As I dig through my boxes of books from yesteryear, I found an old box that had books from the late ’80s and ’90s I forgot about.
Palladium Fantasy and Rifts RPG
The screenshot is just a sample of the books I have on my table. As I thumb through them, I had to stop and smile as I saw the familiar warning logo & disclaimer that each book had:

I remember it fondly as I was playing AD&D 1e, (That’s Advanced Dungeons & Dragons First Edition, NOT Dungeons & Dragons first edition, please stop calling it that, it only makes you look stupid), and it seemed that TSR was switching over to AD&D 2e and Gary Gygax was pushed out of his own company.
I thought it was awful, I didn’t care for the changes at all. I played it for a short time with my friends as that’s the direction we went. I also played AD&D 1e, sneaking in a game when I could with my friends who still enjoyed the “dead edition” as they called it.
Anyhow, in the summer of ’90 right before the break, I was in high school and met some new gaming friends after expressing some annoyances of AD&D 2e. Well much to my delight, they had a game in mind for me, it was called Palladium Roleplaying Game, which was basically the old style feel of AD&D 1e, which can only be described as darker, more realistic and dark.
So I picked up the book and it opened to the Ward Symbols page and I thought that was the coolest shit my little 14-year-old mind had ever seen. 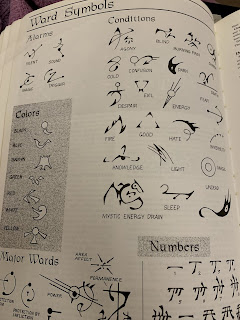 Remember, back then we really didn’t have much of an internet, AOL was kind of a thing, so there was no real searching the web, so books like this were fucking cool as shit. Plus I was into heavy metal, so uh, this was dark shit (well it’s not, but hey 14 year old little me thought it was!)
I borrowed the book and poured over it that night reading all 270+ pages in one night. The next day I went to school and handed the book back to my new friend and said I was in. After school that day we rushed to his house and we made up characters. Having zero clues how to play or what to play, I stuck with something basic, like a fighter in AD&D, but my eyes landed on the Knight class. It was really cool but basic enough to learn.
The game was so different from what I was used to doing, things ran off of skills with percentile dice and used a d20 for attacks or saves.
I was hooked. I spent the whole summer playing this with my friend, going to his house like every day, until I finally purchased my own book from the local hobby store, $19.95 plus tax wasn’t an easy thing to save up for as a 14-year-old kid with an allowance of $3 dollars a week. I mean I had other expenses, like comic books, candy and trying to impress the local girls 😉
A bit later on that year, my new gaming buddy picked up something called RIFTS.

I fell in love with this game instantly, Scifi feels, mixed with Fantasy.. humans trying to survive against this threat of invaders from other dimensional “rifts” in reality? UM sign me up now.
I dont remember exactly when, but one campaign we played was in the Vampire Kingdoms, look how cool this cover is:

A few years later as time passed I purchased more and more books, oh sure I still played AD&D 1e, but I played RIFTS and Fantasy a bit more when I could. I purchased one of the special collector’s edition when I was able to through my hobby store. 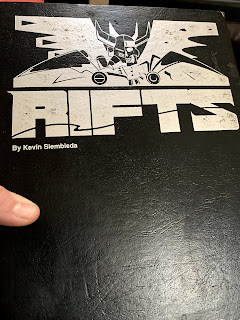 Well now that I’ve broken these books out, I think its time to start making up characters again, and most importantly, videos for my youtube channel!
– Evil Out!

This site uses Akismet to reduce spam. Learn how your comment data is processed.

Follow/Subscribe via email!
Click here to Follow this Blog & Stay up to date!
Follow The Evil DM on WordPress.com
Latest Episode of my Podcast:
Want to Support me?
Subscriptions:


Buy me a coffee!

Check out my podcast!